#BBMoment: Glossier, By the Buzz

When it comes to cosmetics, Glossier has carved out a totally unique space in the beauty industry today. From their marketing and social strategy to their product selling, this is a beauty brand that creates its own formula. Glossier, founded by blogger Emily Weiss, offers up “beauty products inspired by real life,” and heavily leverages user-generated content on their successful Owned Media channels. However, we’ve also noticed that traditional media accounts for over half of the Media Impact Value™ generated for the brand (in the month of May), and in the case of the influencers Glossier partners with, YouTube, rather than Instagram is king.

This is a beauty brand that creates its own formula.

Glossier’s marketing trends – by the buzz

Glossier generated a total MIV® of $10.9M in the month of May. $2.26M of that was thanks to the brand’s Owned Media. And 99% of that, was all down to Glossier’s Instagram channel.

When it comes to finding an example of the best practices of user-generated-content, look no further than Glossier’s Instagram feed. The brand has long been known for celebrating its customers and treating “each of them as an influencer,” allowing the brand to rack up a following of 2.1m fans. Glossier famously has a group of brand ambassadors who are super-fans of the brand, and if you scroll through their page, most of the Voices featured are Micro influencers. In fact, this post on their feed was the top earner of MIV for their Owned Media, generating $131K in MIV, 105K likes, and 242 comments:

“Had the total pleasure of test driving the new Glossier ‘bubblewrap’ eye cream before the launch 💫 my under eyes are feeling plumped like a baby, and that’s fine by me🧴👼🏽”— @laurenmichellepires

Glossier uses a strategy that allows them to share visual testimonials on their Owned Media channels, by encouraging customers of the brand to share their selfies (and #shelfies) using the products. This type of word-of-mouth marketing also generates authentic buzz, as consumers are starting to demand higher levels of transparency when it comes to the brands they buy from. The value of someone you know promoting a product can be much higher than that of an influencer, as there is a different level of trust-transaction involved.

Interestingly, Traditional Media accounted for the largest share of MIV ($5.46M) generated by Glossier during the month of May. Most of this was online media coverage, from China, the UK, and the US, however, the top MIV generating placement was a print feature in Better Homes and Gardens ($157K).

Cosmopolitan, Elle, and Forbes also ranked highly in the top Voices generating Media Impact Value for Glossier, as Forbes alone featured 33 placements online. QQ, a Chinese media outlet, was also responsible for a whopping $367K in MIV overall, which shows the brand’s efforts to expand internationally have paid off.

The fact that Traditional Media accounted for over half of Glossier’s MIV, shows the importance of leveraging a mix of Voices when it comes to brand marketing strategies. Whilst Glossier retains a lot of media value from their Owned Media channels, (which can obviously be seen via their Instagram), they also rely heavily on features from Traditional Media sources, which may not be as obvious at first glance.

Most of the influencers that Glossier activated in the month of May, were Mid-Tier (those with a following of 100-500k), as this group was responsible for $1.37M of the total $3.15M MIV generated by influencers overall. Unlike Anastasia Beverly Hills in our last #BBMoment feature, 83% of Glossier’s MIV earned via social channels was via YouTube. While Instagram is still important when it comes to activating influencer voices, video content is slowly rising, and the beauty community on YouTube has long been significant within the industry.

Here’s a look at the top 5 influencer Voices driving value for Glossier in May: 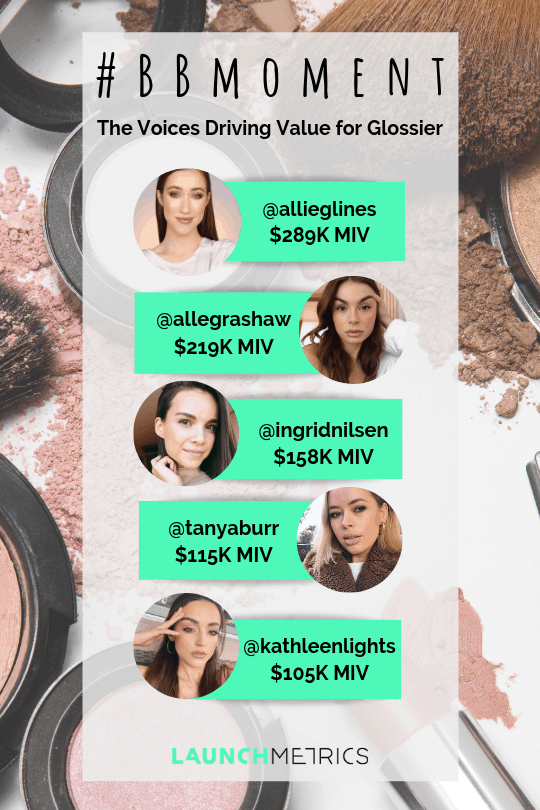 The highest value-generating influencer for Glossier for the month of May was Allie Glines, a Mid-Tier influencer who racked up a total MIV of $289K for the brand over a series of 15 placements across her YouTube and Instagram channels. All-Star Influencers, Ingrid Nilsen, Tanya Burr, and Kathleen Lights also featured in the top 5, even though this group overall represented the lowest share of MIV, perhaps because a small proportion posted about the brand in May, or because most of Glossier’s budget is directed at Micro influencers and super-fans.

What we can learn from Glossier’s data, is that it is important to curate the right Voice mix, in order to activate the most effective brand coverage, and generate high levels of Media Impact Value. The brand doesn’t rely on any singular method or strategy to create impact, which is why their digital strategy is so famously successful.

Do you want to step up your beauty brand’s game?

Read our report, Beauty Redefined, to learn key industry insights, by the data.

#BBMoment: Dior, and Why More is More

How Influencers are the Face of Beauty

The Question about Sustainability in Fashion | Infographic