SS23: The Voices That Matter

In September 2022, presenting the Spring Summer 2023 collections, Fashion Week has returned to full speed, with every fashion capital experiencing an increase in an overall MIV® compared to the FW22 season.

The key to this result came from Influencer participation where the Influencer Voice ranked 2nd in all four capitals. The presence of Influencer Voice has grown more than double since the last season, now amounting to over $214M in MIV® across all four capitals. This success is directly linked to finding the right Voice and in this article we take a deep dive to the share of Voices and their impact during fashion week by Media Impact Value™(MIV®).

A deep dive into the top Voices of New Fashion Week

New York fashion week generated a total MIV® of $286.4M which was an increase of 145% compared to last year, with Media being the strongest Voice with 78% of the total MIV® originating from media placements.

We note that the second largest Voice was Influencers, followed closely by Celebrity to which APAC had an integral impact coming from APAC celebrities being spotted on the front rows of many shows. When looking at the split per country, NYFW received significant attention from the APAC region, with India and Indonesia climbing to the top 5 in the country ranking due to high attendance of influencers originating from the region. This includes Indonesian actress, Nagita Slavina, who ranked 1st as top Influencers Voice generating $2.8M in MIV® across 9 placements during NYFW.

During the week, American Vogue garnered an exceptional $32M in MIV® across 3.6K placements in celebration of its 130th Anniversary accompanied by a live fashion show that reached the top place in the runway rankings. For the show, Vogue alone produced the echo around the event worth a notable $12M in MIV®.

A deep dive into the top Voices of London Fashion Week

London Fashion Week amassed $41.8M in MIV® this season with social media leading the week. Regionally speaking, China jumped the country rank to appear in the third place for the week, where they were in the 17th place last season, due to the growing influence of Chinese social media. This jump signal brands’ efforts to break through in the region through Chinese social media channels where this can be attributed to the star-filled audience present during the fashion week, including Chinese celebrities.

A deep dive into the top Voices of Milan Fashion Week 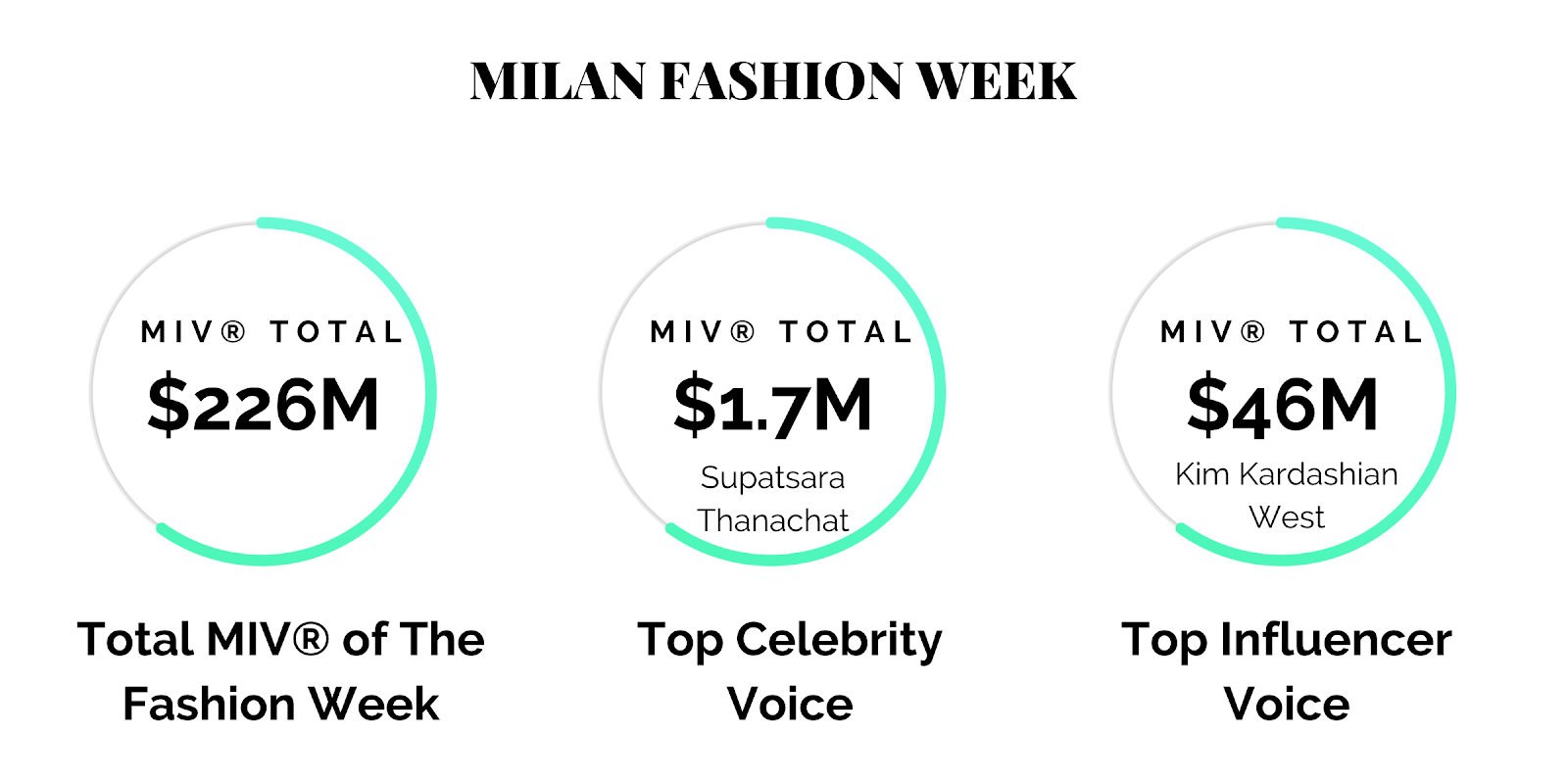 Milan Fashion Week had great success in creating media buzz around the event and managed to generate an impressive MIV® totaling to $226M across 48K placements.

Interestingly, 82% of the total MIV® originated from social placements, with Influencer Voice ranking as the second place in the Voice Split. This was contributed by the fact that the week was highly covered and received great attraction on social media. One example of this is the involvement of social media royalty such as Kim Kardashian West who ranked 1st as top Influencers Voice generating $46M in MIV® across 21 placements, as well as additional $4,6M in MIV® across 21 placements for Dolce & Gabbana this season. Understandably a surprise collaborative collection between a high known celebrity and a fashion house caused traffic in social placements.

Other Voices not far behind, Supatsara Thanachat ranked 1st as top Celebrity Voice generating $1,7M across 13 placements and Scuderia Ferrari ranked as the top Voice for the week, garnering an outstanding $15M in MIV® across 155 placements.

A deep dive into the top Voices of Paris Fashion Week

This season, Paris Fashion Week amassed an impressive $384.2M in MIV®, marking a sharp rise of 48% since the last season with Media accounting for the majority of the Voice mix generating $213,2M across 57.K placements and accounting for 55.50% of the total MIV®.

Influencer and Celebrity Voices also contributed significantly to the Voice mix with Influencer Leonie Hanne ranking as top Influencer Voice generating $1,7M across 39 placements and Korean band Blackpink’s member Jisoo generating the top placement for PFW, earning $1.5M in MIV®. In fact, Korea proved to be a significant region for brands especially with social placements and influencer Voices. Ranking as fifth in the country split due to the many influential Korean stars including Sandara Park, Jisoo, Im Yoon-ah and many more in attendance at fashion weeks.

Another interesting turn of events regarding Influencer Voices happened when the influencer Taylor Timinskas who became the only Influencer Voice that generated the most MIV® for a brand as part of the Voice split during the week where usually owned media is the top generating MIV®.

This insight tells us just how important it is to know where your top Voices are coming from and how you can leverage this information to grow your visibility. By understanding your audience, brands gain the opportunity to maximise their success during Fashion Week.

Céline is passionate about the fashion industry and loves to create content, both written and visual. She is the Brand Content Manager at Launchmetrics and is always excited to delve into the fashion digital world that is shaping the industry of tomorrow.