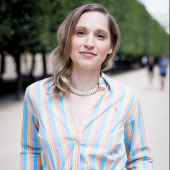 Ever since the blogging boom, we’ve witnessed major changes to the front row of fashion shows in recent years. Fashion brands have caught on quickly to the power that fashion influencers can have when it comes to generating buzz around their collection launches. All-Star Influencers such as Chiara Ferragni or Cardi B garner incredible impact for fashion brands, as we’ve previously seen in this post. However, this time around we decided to investigate the top Mega Influencers (with 500K-2M followers) as they are also able to reach a vast audience and remain relatively ‘close’ with their communities, creating strong engagement.

After analyzing the data, these are the top five fashion influencers who rocked the SS19 Fashion Weeks on Instagram, according to our proprietary Media Impact Value™ algorithm (MIV®).  If you’re not familiar with how MIV works, we recommend checking out this post where you’ll learn all about the industry measurement tool.

Xenia Adonts, formerly known as XeniaOverdose — due to her ‘oversharing’ approach on all things fashion and style, tops our charts having generated $1,243,437 in MIV during the SS19 schedule alone.  Her recent (and active) involvement in all 4 major Fashion Weeks, starting with Tory Burch in NYC, has proven to keep her 1.2 million followers engaged as she brought them with her to the shows, soirées, and everywhere in between from London, to Milan and Paris.  Hailing from Hamburg, Xenia is moving to Paris at the end of the month to continue her pursuits in the city of lights.

In close second, with $1,186,199 in MIV, is another Hamburg native, Caroline Daur.  Known for her stylish petite figure and big personality, Caroline has generated an Instagram community of over 1.7 million followers who relate to her friendly and down-to-earth, quirky charm.  This season she began her Fashion Week tour in NY for Ralph Lauren before continuing to London, Milan and Paris — with stops in between for other collaborations and events.  Caroline never stops and is always on the move, making it hard not to live vicariously through all her adventures!

With 1.2 million followers, Karina Nigay —Russian stylist and fashion blogger — has garnered $1,181,478 in MIV from attending just the Milan Fashion Week alone!  Her strategy? Post actively, hashtag always, and create strong engagement. She attended collection presentations at Patrizia Pepe, Furla, and Bulgari; the shows of MaxMara, Roberto Cavalli, Iceberg, Giorgio Armani and Philipp Plein, as well as posted for Santoni and Coccinelle, to name a few.

Polish fashion blogger Jessica Mercedes Kirschner, known as @Jemerced to her Insta-family of 920K followers, ranks 4th on our scale with a total Media Impact Value of $1,076,649.  Jessica was a strong force during Milan and Paris with Fendi, Moschino, Saint Laurent and Chloe shows, attendance at brand presentations such as Moncler and Gucci along with local collaborations with Zalando, Adidas, L’Oréal Makeup and Vitkac, the reference luxury department store in Poland.

Irene Kim, aka Irineisgood, has 1.3M followers and reached a total MIV of $938,537 during the SS19 season.  Irene’s positive attitude and fresh look has helped put South Korean style on the map. She began this year in New York, before heading off to Milan and Paris, where she boasted it was her 10th season at the shows — a veteran amongst the group. When she wasn’t hanging out with her industry insider friends and models, she was posting #OOTD looks, highlights about the shows and participating in offshoot collaborations with the likes of Michael Kors and Chanel.

We hope you found this MIV-based ranking insightful and would love to hear your thoughts below in the comments! Who do you think could make it into the top 5 ranking in the future?

If you’re looking into collaborating with influencers, make sure to check out our step-by-step guide: Influencer Marketing 101. Katherine — American in Paris since 2008 — left the state of Minnesota to pursue her dreams in the fashion, luxury & cosmetics industry when she was 18, where she studied and received her undergraduate and Master’s at the French Business school, ESSCA. She has been active in Marketing and Communications since, and has always had an interest in the business side of fashion: understanding the industry and what makes it tick. In her spare time, she loves to travel often, cook for friends, and work out.

Top 5 Mistakes Clients Make And How They Can Be Avoided