Friday the 12th of February, 2021 marks the Year of the Ox and the start of celebrations for Chinese New Year. And, with China set to be the world’s largest luxury market by 2025, it’s no surprise that brands across the globe are activating campaigns, creating tailored collections, and initiating collaborative partnerships all centered around the Lunar New Year. Last year, we released our data brief, tracking the most impactful campaigns in luxury fashion dedicated to Chinese New Year, and for 2021 we have utilized data from PARKLU by Launchmetrics, to showcase insights on successful influencer campaigns in China with Guerlain, Burberry, and Gucci.

Beauty brand Guerlain was one of the first to celebrate the Lunar New Year by releasing a limited-edition lipstick and matching lipstick case with a red bee pattern. In order to amplify the product launch, the brand activated over 70 KOLs (Key Opinion Leaders) with different content mediums – from lipstick tutorials and educational content to PR gifting and unboxing – yet all aesthetically incorporating the same red New Year designs.

The top-performing KOL was the well-known ‘lipstick King’ Li Jiaqi (@李佳琦Austin) also known as Austin Li, who rose to fame after trying ono 380 lipsticks in a livestream show on Taobao. Li is a long-term partner of Guerlain, and his unboxing video earned the highest media value and engagement rate across the entire campaign. Part of what contributed to a large number of KOLs participating in the campaign (76 in total) was the Chinese New Year dinner that the brand hosted, welcoming the likes of @仙姆SamChak – a popular makeup artist and video creator. 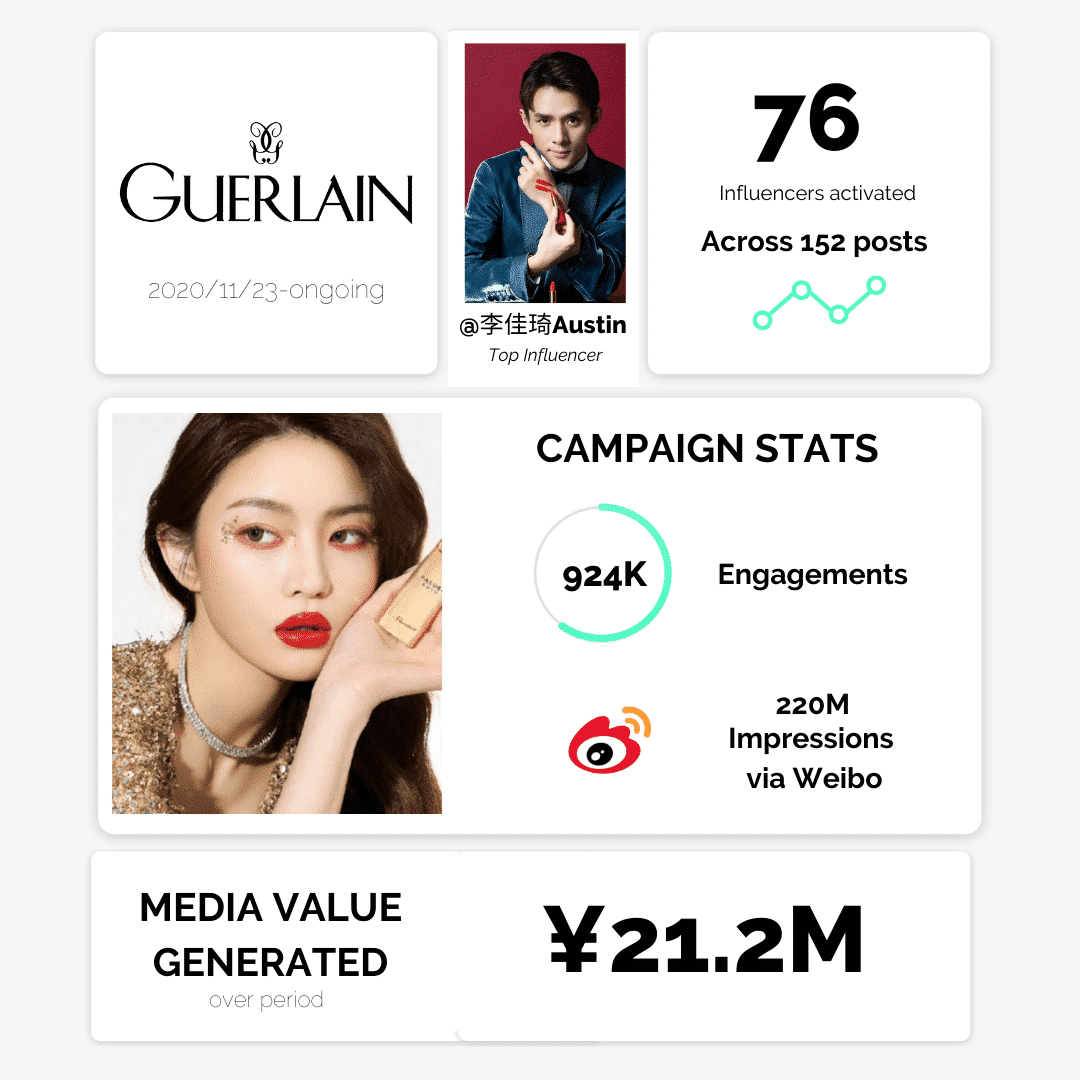 British heritage brand Burberry was one of the first luxury fashion houses to invest in China, by engaging in creative campaigns across different mediums and channel formats. For Chinese New Year 2021, Burberry shared its campaign which starred models Liu Wen and Wang Xiangguo and was captured by photographer Feng Li. The brand also invited 30 KOLs from musicians, actors, models, and designers to shoot advertisements and posters specifically across Weibo for the new collection launch.

The different types of content that were released were categorized in order to meet different target niches within the target market for the brand. Some created OOTD videos, others attended Burberry’s special pop-up store, and more shared content around Burberry’s short film: A New Awakening, racking up over 200M Impressions via Weibo alone. This categorization and diversification of format contents helped the brand achieve a range of different goals, from concrete content that provided audiences with a real look at the collection, to more aspirational and creative posts that drummed up anticipation around the launch. 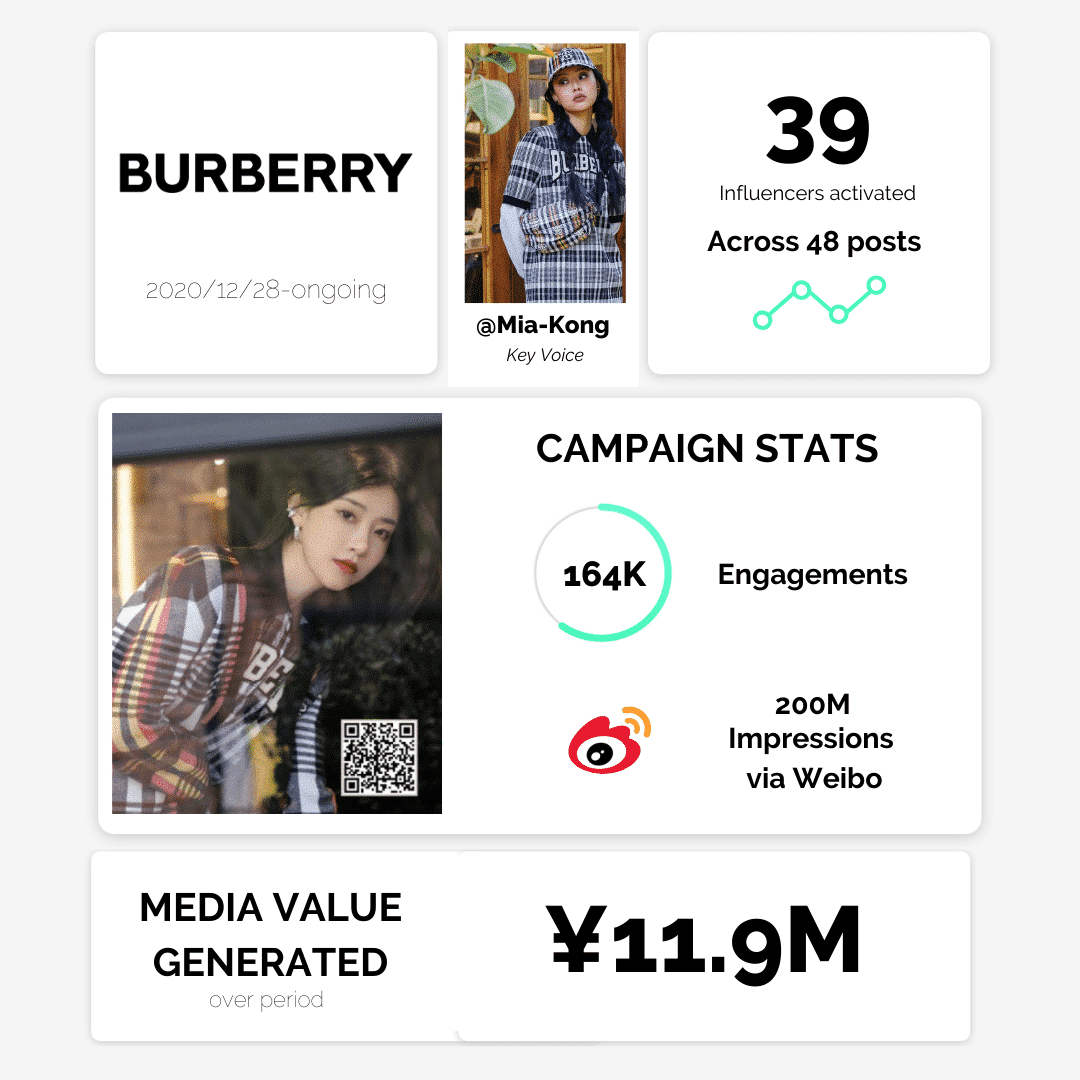 In celebration of the Chinese New Year, Gucci also released a brand new collection. Not only did the new collection commemorate the new year, but it also celebrated the 50th anniversary of Japanese anime character Doraemon as well as the grand opening of their Tmall flagship store!

In order to promote this multitude of celebrations, the brand invited over 100 KOLs to post and share the event across their channels. To reach an even wider audience, Gucci launched interactive experiences online for their consumers to take part in. Additionally, they opened up pop-up stores in a total of nine different cities including Shanghai, Beijing, and Chengdu, which resulted in an even greater attraction of KOLs and KOCs. Overall the campaign tracked more than 380M impressions via Weibo.

To generate an even greater buzz the brand utilized 宇博gogoboi to pose as Doraemon and interact with followers – he would also hold a lottery for Gucci products. This strategy resulted in a huge success and achieved the highest media value and interaction rate of all KOL posts across the campaign, demonstrating the effectiveness of Gucci’s interactive approach and the success of this communication strategy with their consumers. We can’t wait to see the plethora of campaigns that will no doubt roll out to celebrate this Lunar New Year. If you would like to learn more about the impact of luxury fashion brands in China, Europe and the USA, read our quarterly report highlighting the top 20 brands by MIV®! How Do Multi-Channel Networks (MCNs) Work in China?